“You don’t enter the garden of paradise with your feet, but with your heart.”

The Monastery of Eberbach was founded in 1136 as one of the first Cistercian monasteries in Germany. It soon became one of the most active monasteries and very successful of profits from the cultivation of vineyards and the production of wine. Currently it is a top tourist attraction of which its significance was emphasised by the filming of Umberto Eco´s novel The Name of the Rose. The site provides a combination of the monastery’s history, architecture and a centuries’ old wine culture.

In the rich history of the monastery there has been a centuries old interaction between the buildings and its natural surroundings. The new hotel expansion which is needed to accommodate the growing number of visitors is not only seen as an opportunity to allow more people to stay in the beautiful surroundings of the monastery, but also as a new chapter in this interaction.

The hotel extension is centred around a new sunken and enclosed garden to which every hotel room has a visual relationship. The enclosed garden refers to the existing abbey gardens, courtyards and outdoor spaces of Eberbach monastery. The herbs and medicinal garden functions as a quiet oasis and green filter in between the guest rooms.

The main entrance of the hotel takes place via an existing gate in the historical wall. From here, the lobby and a circulating corridor distribute the visitors to the hotel rooms or to the existing old building with serving functions like the restaurant, bar and conference and fitness area.

The dominant material of all structural elements of the new building is solid spruce cross laminated timber – CLT, the surfaces of which are left in view in the interior. Concrete is used for the floor slabs and underground walls.

The facade above the historical wall is made of slate in a style and pattern which is also used on the surrounding roofs of the monastery buildings. The garden facade consists of vertical wooden planks treated in a ‘Kloster Eberbach’ red color. The ‘fifth facade’ is a green natural roof, which visually continues the mountain vegetation and also serves as a water reservoir. 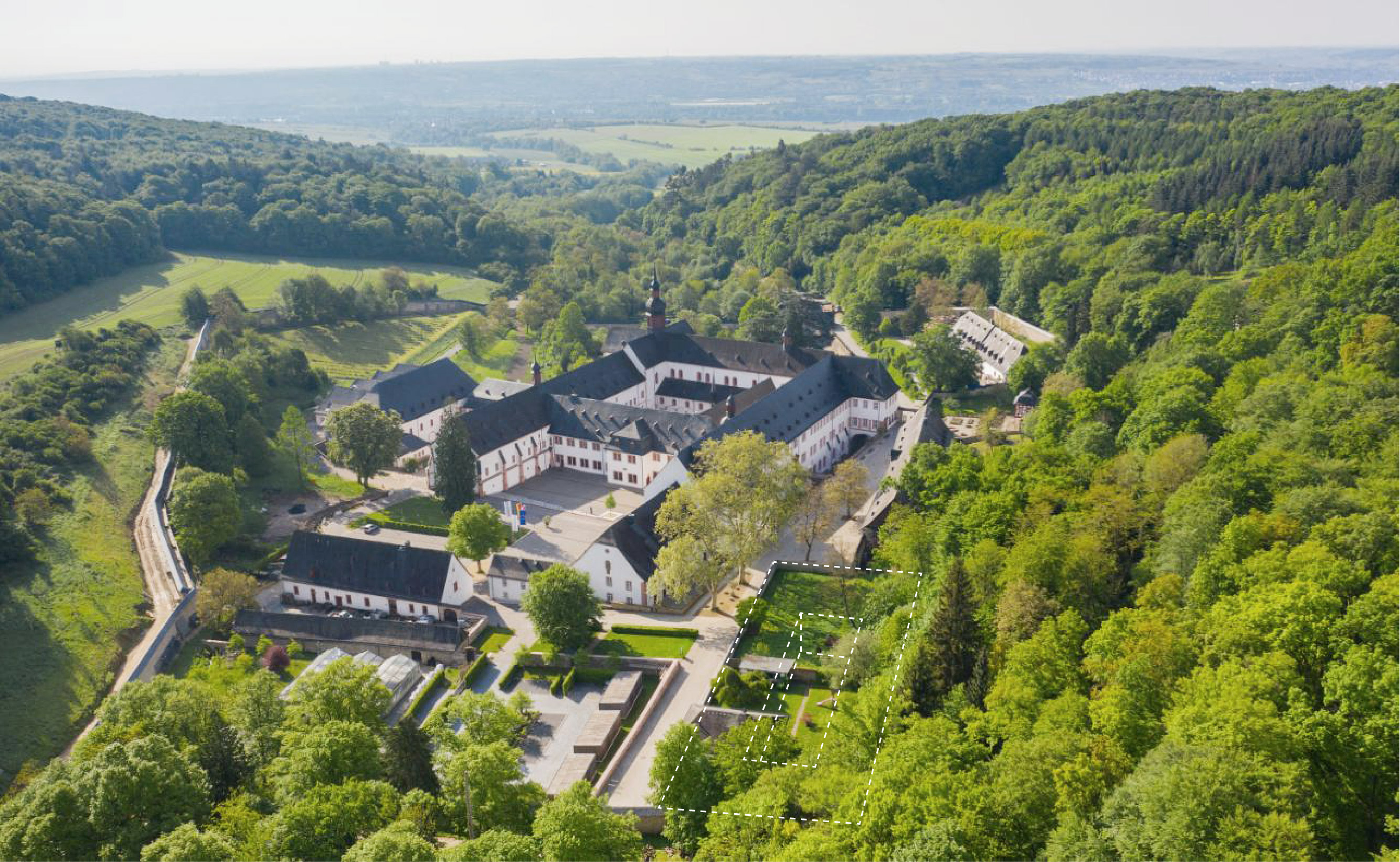 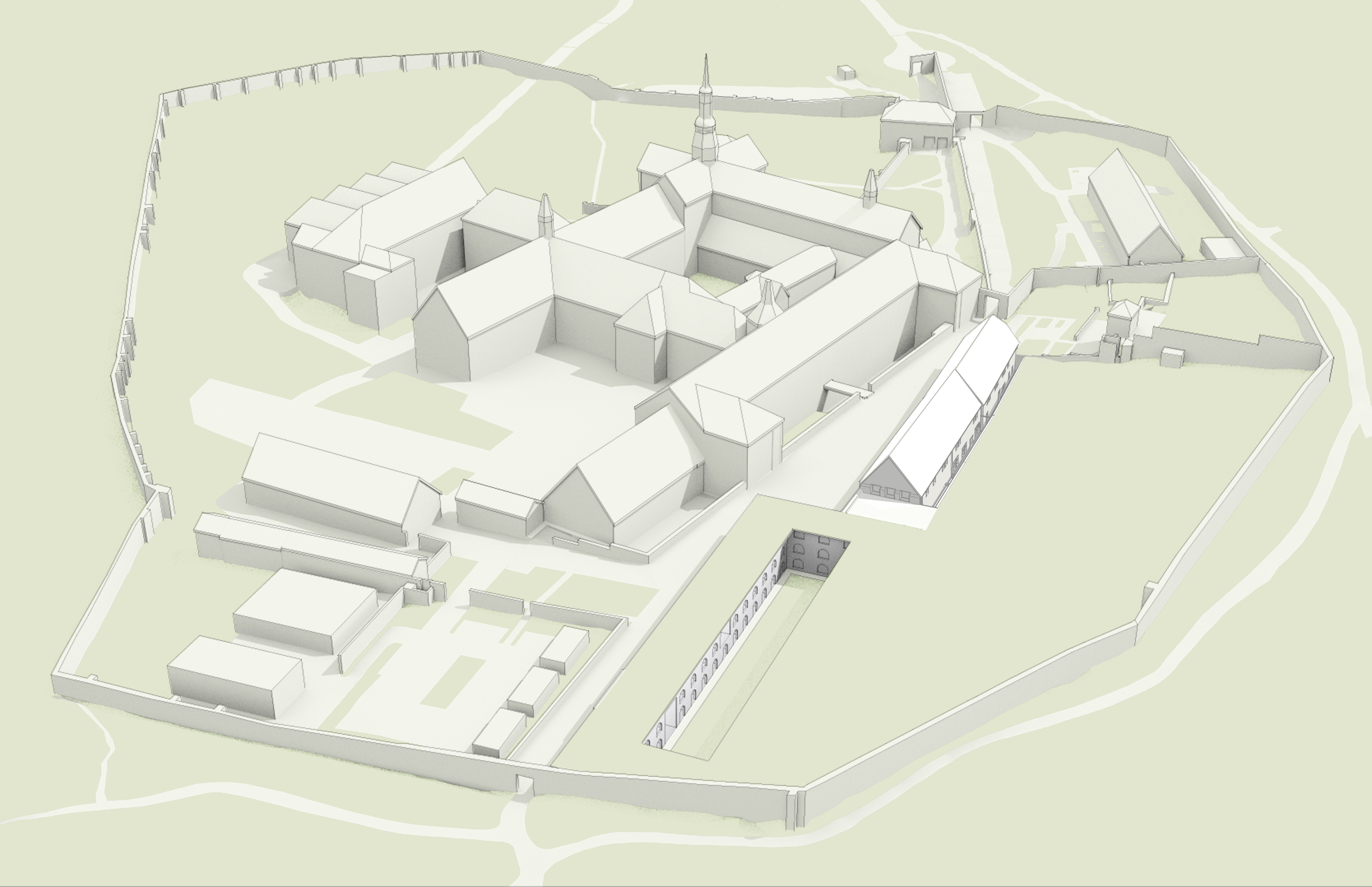 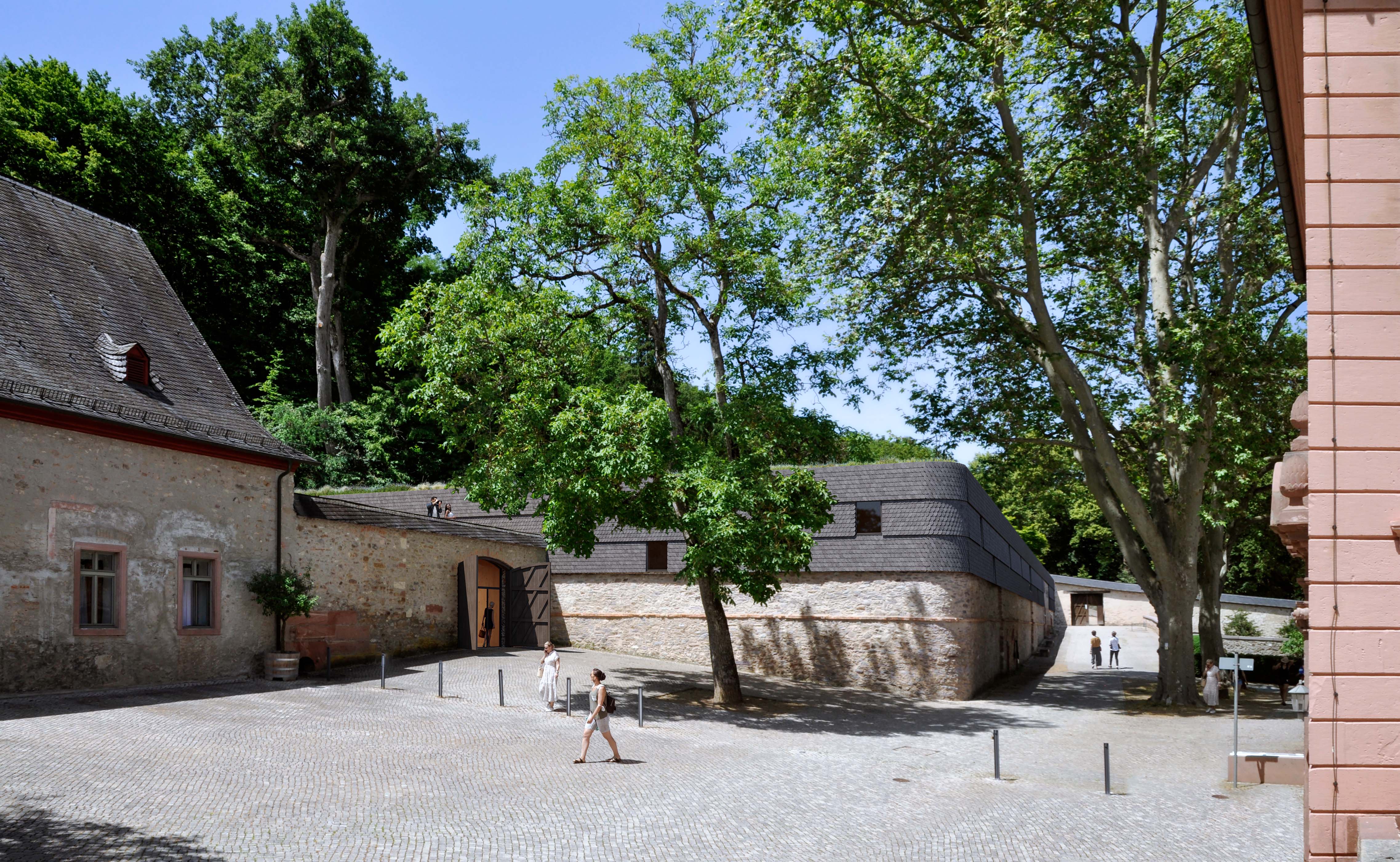 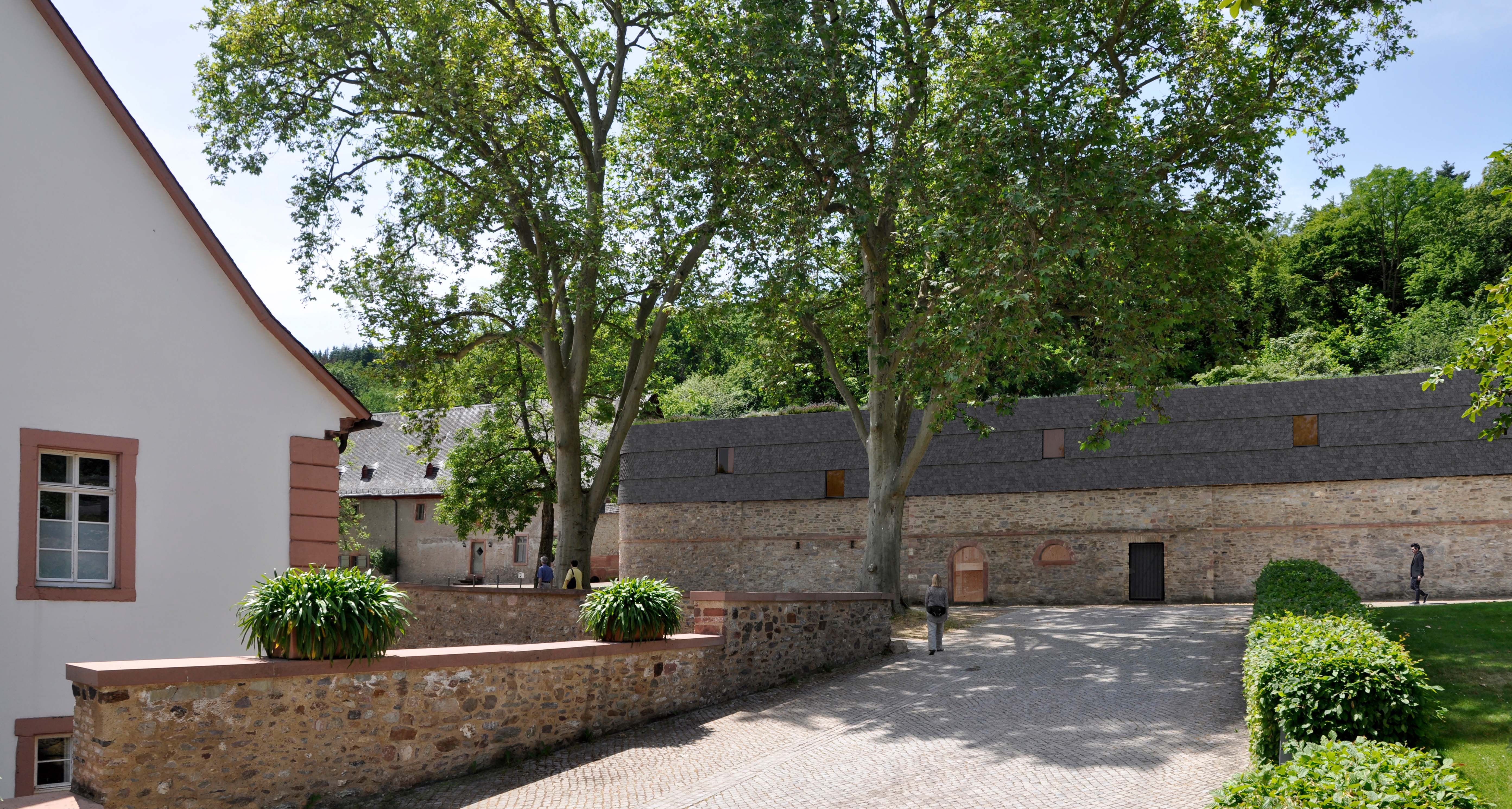 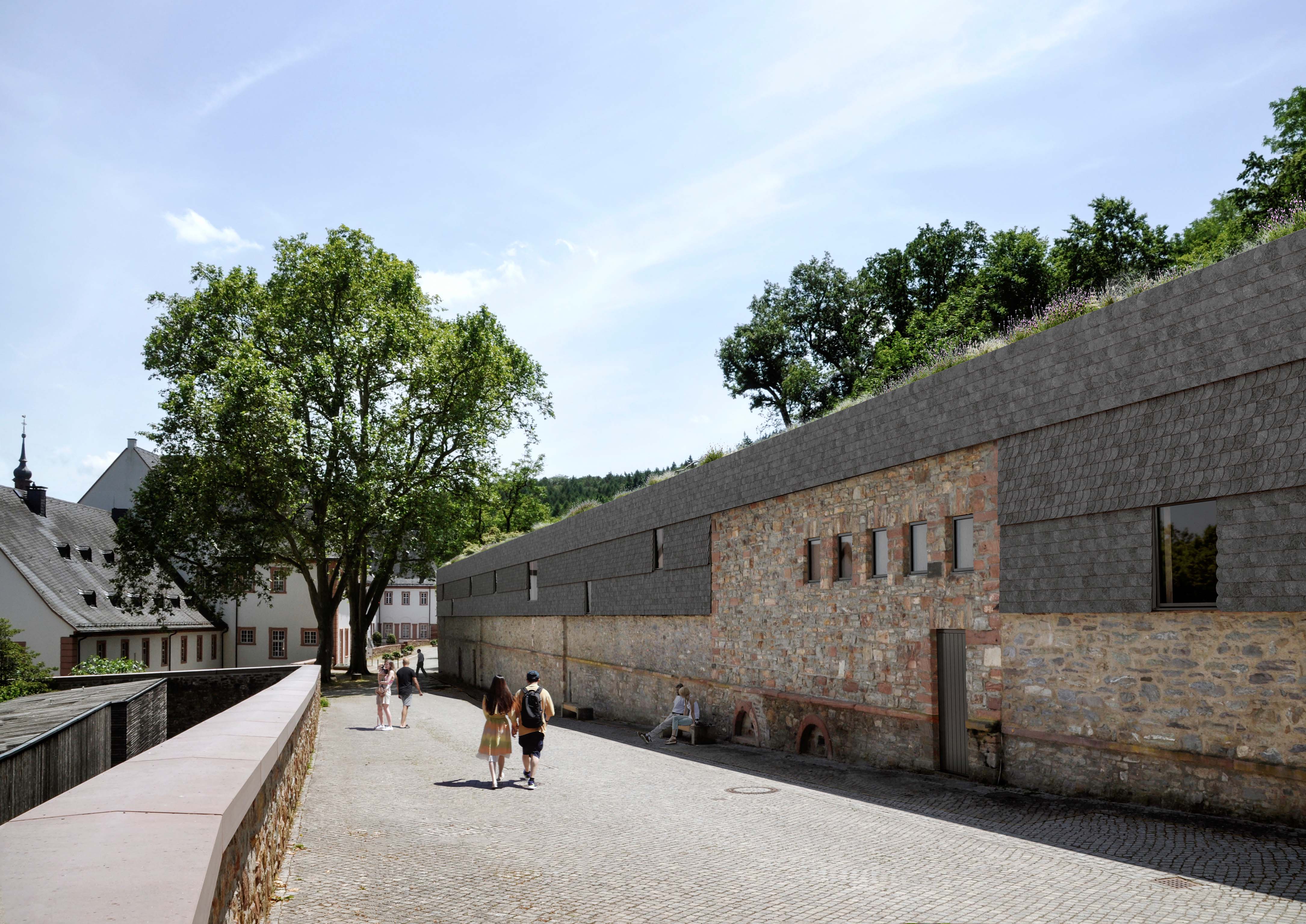 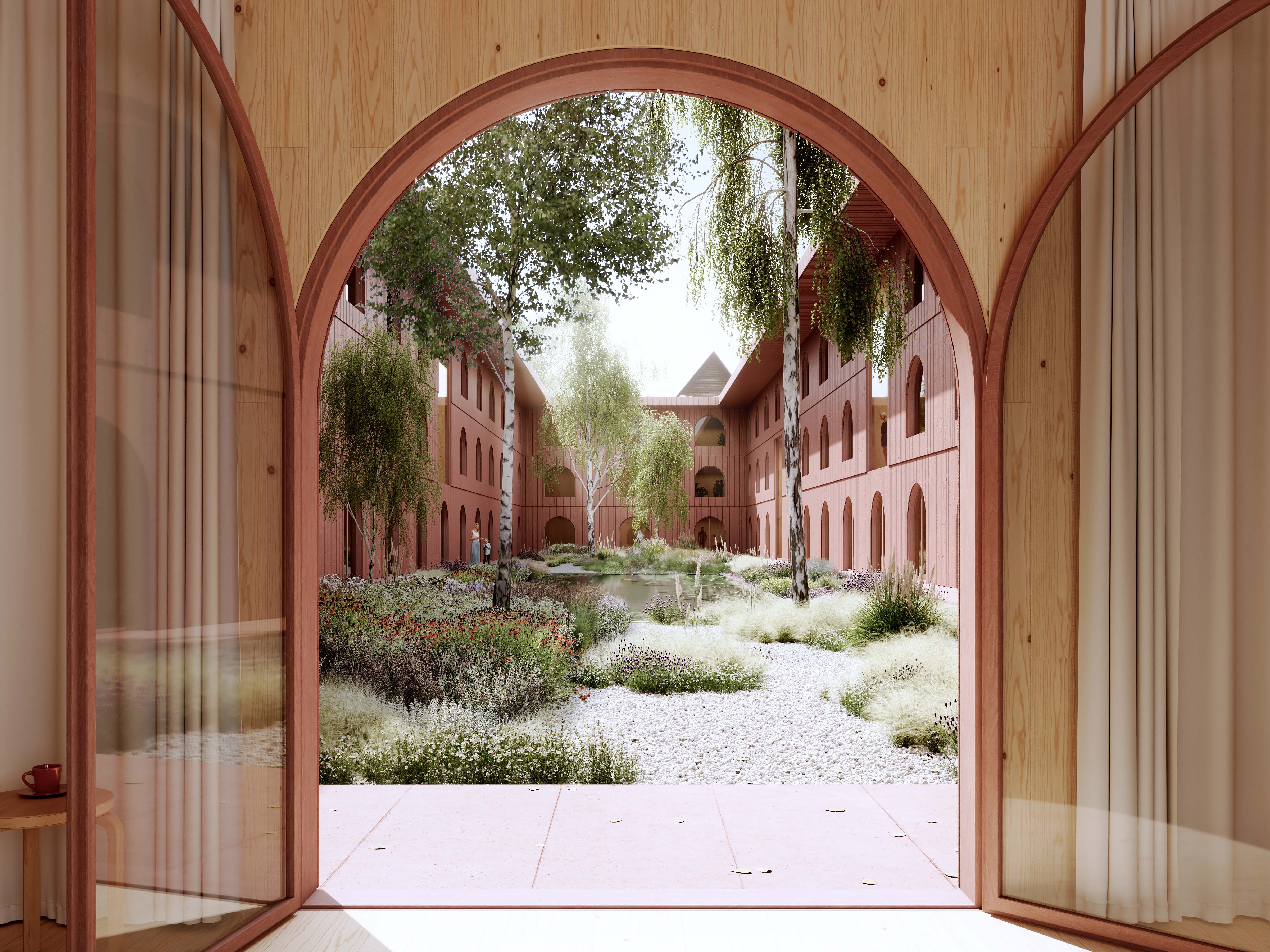