Amsterdam is experiencing a period of rapid growth and with the development of Sloterdijk-Centre, a new business and housing district located next to the busy Sloterdijk Station, the city boundaries move more to the west. The underpass under the A10 ring road connects the centre of Amsterdam with Sloterdijk-Centre and is used by thousands of people every day on their way to work, school and back home. This was the reason for the municipality of Amsterdam to organize an open competition to select a design that would transform the dark underpass into “a place of wonder and worth a detour.” The design of Children of the Light and HOH Architecten makes a static space dynamic and an everyday experience special. The cyclist, pedestrian and tram itself become part and subject of the work, actor and spectator at the same time.

The underpass is transformed by reacting to its existing qualities; the dominant structure and the dynamics of its use. A cyclist, pedestrian or passenger in the tram uses the underpass in the morning to go to work and in the evening to go back home, back and forth. The difference between these two directions and moments of the day is reinforced in the design by giving the underpass two different faces like the Roman two-faced god Janus, god of transitions, gates and time. Each face is characterized by a material that is frequently used in the world of infrastructure: the mirror and the retro-reflector.

In one direction the front side of the V-shaped concrete columns are clad with panels with retro-reflective film, a material used for traffic signs that reflects the light back to the light source. When a cyclist, scooter or tram drives through the underpass with theirs lights on at night, the film and the space will light up and guide them through the underpass. In addition, there is an interaction between the different users and their lights, a play of light and shadow, or actually a play between light and its absence.

In the other direction the concrete columns are covered with mirroring panels, making them lose their heavy and massive appearance. Back and forth is literally being reversed here: in the mirror you see where you have just come from. Mirroring cassettes on the ceiling take over the rhythm and length of the existing beams. Old and new create a new unity and reinforce each other’s presence. The mirroring cassettes make the existing dark space lighter, more spacious and open. From a distance, the underpass even seems to dissolve.

The panels on the ceiling and the columns have been applied in a gradient from many to a few over the full width of the underpass. This emphasizes the architectural qualities of the passage as a space in itself. 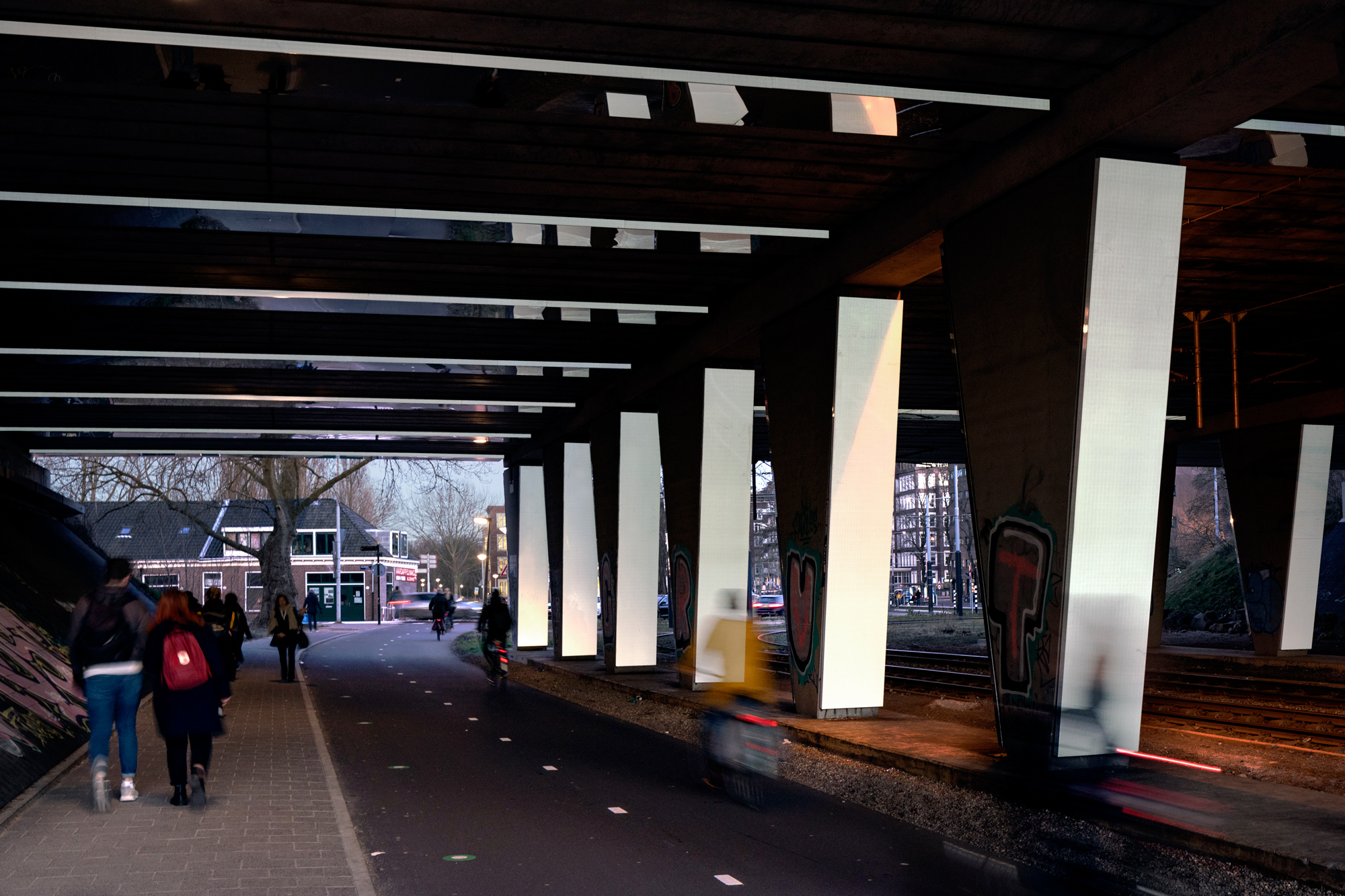